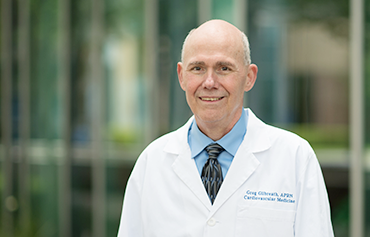 Greg L. Gilbreath, NP, has been practicing medicine since 1980.

Greg received his Bachelor of Science in Nursing degree from Texas Womans’ University Houston in 1979. After a brief employment at The Methodist Hospital, Greg began working as a staff nurse in the ICU at St Elizabeth Hospital in 1980. He continued working there until 1995 when he resigned his position, as the Nurse Manager of ICU, to begin his nurse practitioner career. Greg received his Master of Science in Nursing degree from The University of Texas Medical Branch at Galveston in 1995.

Since that time, he has held positions as a family nurse practitioner for the St. Elizabeth health care system and Southeast Texas Medical Associates. Prior to joining Advanced Cardiovascular Specialists he worked with local Beaumont cardiologist Dr. Timothy K Colgan. Greg is certified by the American Nurses Credentialing center and is a member of the American Academy of Nurse Practitioners.